The United Arab Emirates, the first foreign country to approve a Covid-19 vaccine developed by Chinese state-owned pharmaceutical group Sinopharm, said it had 86 per cent efficacy, according to interim results of a phase 3 trial.

The announcement is a boost for Beijing’s ambitions to establish its pharmaceutical companies as global leaders in developing and distributing vaccines and comes after the release of final stage results from western frontrunners Pfizer/BioNTech, Moderna and AstraZeneca/Oxford.

Chinese developers were forced to carry out phase 3 trials overseas because the virus is now almost fully under control in China.

The UAE Ministry of Health and Prevention said on Wednesday it had officially “registered” the Beijing Institute of Biological Products’ inactivated vaccine, which was developed jointly with China National Biotec Group, a Sinopharm subsidiary.

The ministry described the vaccine as a “major step towards combating the global pandemic”.

The UAE, which in September approved emergency use of the vaccine for its frontline workers, said Sinopharm’s interim analysis of phase 3 trials had shown 100 per cent effectiveness in preventing moderate and severe cases of Covid-19. Data underlying the analysis have not been made public.

Shares of Sinopharm’s main listed arm rose to hit the 10 per cent upper limit of the Shanghai exchange in afternoon trading on Wednesday, closing at Rmb54.70.

The UAE is conducting post-authorisation safety and efficacy studies, which it said were showing similar results to the interim analysis. Vaccine trials on people from 125 nationalities in the UAE began in July.

“The official registration . . . leads the way to comprehensively protecting the population and responsibly opening the economy,” the UAE ministry statement said.

China has pledged Covid-19 jabs to much of the developing world in a bid to strengthen partnerships and influence in regions hard hit by the virus and underserved by the US. 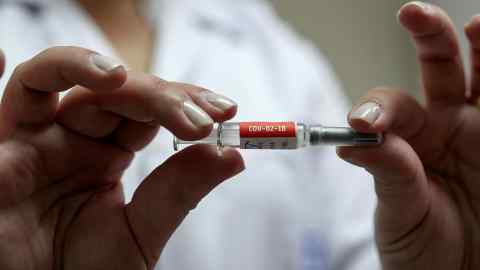 Sinopharm, which also is preparing to distribute a second vaccine developed with the Wuhan Institute of Biological Products, has said it would have manufactured 100m doses of the two vaccines by the end this year and could provide as many as 1bn doses by the end of 2021.

The group is currently conducting phase 3 trials with local partners in 10 countries, including Bahrain, Egypt, Jordan, Peru and Argentina.

Since July, the jabs have been administered to hundreds of thousands of people, if not more than a million, within China as part of a preapproval limited use programme.

Sinopharm last month applied to China’s medicine regulator to make its vaccines available for commercial sale, despite having to yet conclude phase 3 trials.

Video: Coronavirus: the global race for a vaccine | FT Interview

China ends visa-free access for US diplomats to Hong Kong